My daughter saved my son’s life

Devon was born on December 23, 2003. When Devon was two, we took him to see our family doctor for a routine check-up. When he listened to Devon’s heart he thought that something wasn’t quite right and that maybe he might have a heart murmur. The family doctor referred us to a paediatrician and sent us for blood work. The results came back completely abnormal and we were sent to McMaster Children’s Hospital immediately. With a platelet count of only 6 (a normal range is 150 – 400). Devon was in desperate need of a platelet transfusion.

Devon had a bone marrow biopsy performed to see what was happening with his blood. Before the results came back the doctors said we were dealing with either leukaemia (blood cancer) or aplastic anemia. When it turned out to be neither, the tests were sent to a hospital in Boston who works closely with McMaster. Devon was finally diagnosed with myelodysplastic syndrome, which is an over active bone marrow that produces abnormal cells that are destroyed before they enter the blood system. 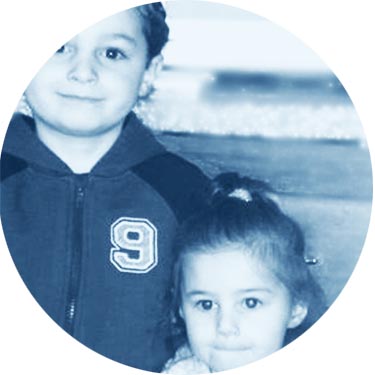 As there is no cure for this disease, the only course of action was to have a stem cell transplant. While looking for a match, Devon had to have weekly platelet and red blood cell transfusions in order to maintain an adequate blood supply in his body. We searched for a bone marrow donor or cord blood unit but did not find any matches. Luckily, we were expecting a baby in two months, so we decided to collect the baby’s umbilical cord blood.

We chose to store at Insception Lifebank on the advice of the doctors at McMaster Children’s Hospital. We had heard of cord blood banking mainly through TV ads. And we knew that a sibling would be the best chance of a match (1 in 4) for Devon. Devon’s sister, Ellison, was born March 30, 2006 and her cord blood was collected through a very simple process..

Ellison’s cord blood turned out to be a 9/10 match, so the doctors at The Hospital for Sick Children (SickKids) in Toronto, Ontario recommended that the use of the stem cells would be the best chance of recovery for Devon.

We decided to proceed with the transplant, which was infused on August 17, 2006 at SickKids. The transplant took 23 days to engraft and Devon and our family spent seven weeks in an isolation unit at SickKids. The six months after the transplant were very difficult as Devon had a brand new immune system (which also means a very weak immune system) and he was very susceptible to any germ/virus. We were not allowed to have any visitors to the house. Devon’s blood pressure had to be monitored daily and he had many medications to take. It was a long road of recovery for Devon who had lost a lot of strength and motor skills during his battle.

Today, Devon is doing GREAT! He has had his three-year post transplant check up (he goes every six months) and after four years he goes on a maintenance program.